AN ACT relative to waterfront buffer and woodland buffer requirements in the comprehensive shoreland protection act.

A proposal for a pilot program that would have placed a speed limit on portions of Lake Winnipesaukee is dead in the water, but a bill that could make such limits permanent is "alive and well" and may now have an even better chance of passing this coming year. 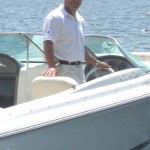 I would be happy to have an excuse to look at Winnipesaukee properties by water.

Published: Wednesday, Aug. 8, 2007New Hampshire home prices took only a minor hit, but sales volume dropped in the first half of 2007, according to the New Hampshire Association of Realtors.

Residential sale prices remained relatively stable in the first six months of 2007 at an average of $303,038 -- a 1.6 percent decline from last year's average of $307,875, which was the peak year historically for January-to-June sale prices. And the June average of just under $313,000 marked the fourth consecutive month in 2007 that the average price has increased.

"During this serious housing downturn in other parts of the nation, values in New Hampshire are holding up quite well," said NHAR demographer Peter Francese, who also pointed to the fact that New Hampshire has one of the lowest home foreclosure rates in the nation as a positive sign.

The decrease in volume and a six-day increase in average days on market (108 in June 2006, 114 in June 2007) has led to a large number of active residential listings.

As of July 16, there was more than a nine-month supply of inventory, with over 12,700 listings in New Hampshire, and 1,377 residences having sold in June, according to NHAR. - JEFF FEINGOLD

The New Hampshire Division of Travel and Tourism Development, in partnership with the New Hampshire Retail Merchants Association, has launched a logo touting the state's tax-free shopping for use by the state's retailers on the eve of the Massachusetts sales tax holiday.

The logo, created as a reminder to Massachusetts residents that every day is a sales tax holiday in New Hampshire, prominently displays the phrase "Tax-Free Shopping in New Hampshire - 365 Days a Year."

The New Hampshire Retail Merchants Association will encourage its membership to use the logo in marketing materials year-round, said the association's president, Nancy Kyle.

"The logo was created to support the state's retail industry in marketing our unique tax advantage," Kyle said. "The Massachusetts sales tax holiday generates publicity and media coverage - and anything that generates interest in retailing and sales tax-free shopping benefits New Hampshire retailers and provides them a tremendous promotional opportunity."

Here is an article in the Union Leader, by TOM FAHEY which gives the Subprime picture in New Hamshire.

Despite the increase, foreclosures will not rise to the level they hit during the early 1990s, and will not drag down New Hampshire banks, according to the study by Brian Gottlob of PolEcon Research in Dover. The New Hampshire Bankers Association asked Gottlob to conduct the study.

No state income tax is one thing I love about New Hampshire and no sales tax is a close second. When you buy a t-shirt with Lake Winnipesaukee and a price of $20 dollars on it, you can give them a $20 bill and it is enough!

The state has a good site to explain the other tax implications of living and visiting New Hampshire. NH State Taxes at a Glance

Most everyone knows about Lake Winnipesuakee, but often times you would like more information on the surrounding lakes. A good resource comes from the University of New Hampshire. http://nhwatersheds.unh.edu/quality.html Just pick a lake name and it gives statistics on the lake, such as waterdepth, size and water quality.

One of the hottest topics on the lake is the speed limit. Here is the latest news on the subject.

Full Article in the Union Leader.